The definitive guide into the minds of fantasy sports players

What goes on inside the minds of a fantasy sports player? What makes him pay enormous amount of money every year on fantasy sports? Read to find out. 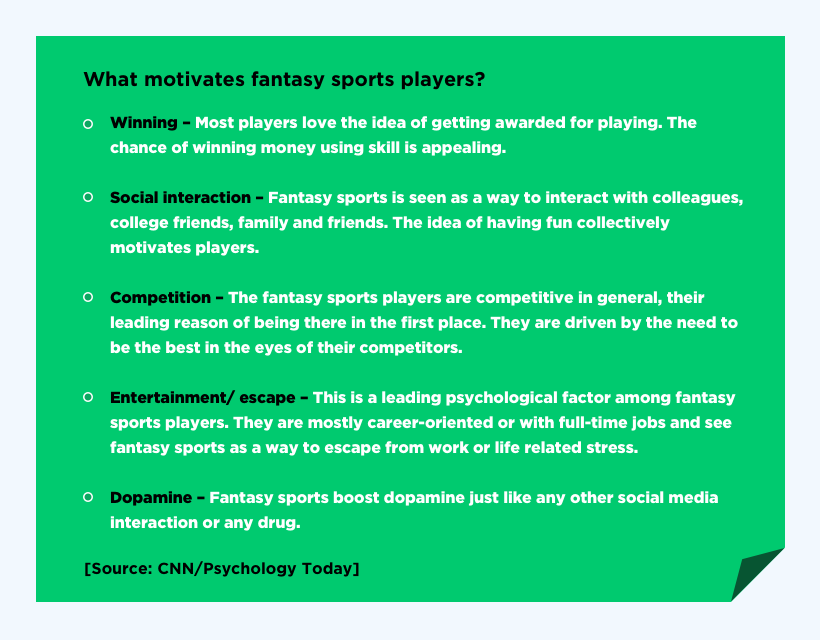 For the longest time millennials dominated and made fantasy sports the gigantic industry that it is today. Even now, millennials happen to be the largest demographic playing fantasy sports. However, good news is that the new entrants to fantasy sports are people from all age groups. If we take US demographic as a case study, we would find that nearly half of all fantasy sports players (48%) are in the age group of 18-34 years. Almost a quarter of this demographic (24%) are new players. What’s really conducive to this industry is the cyclical churn of fantasy players which keeps creating new players in the cycle as old players either outgrow it or leave for various reasons. This results in regeneration of player demographic and keeps the industry going.

Various studies and researches indicate that those playing fantasy sports have the following characteristics:

Fantasy sports players are in their 20s and 30s – the youngest demographic in the world. That’s because this is a generation that was exposed to internet very early in their lives and picked up online games during their student years. This generation also had better sources of education which further strengthened their faith in technology and online applications. They were and are predisposed towards online gaming. For instance, 31% of adult fantasy players in the US have a postgraduate degree.

This generation was brought up in technology, meaning, their parents had enough money to give them good education. As a result, they are employed in well-paying jobs, some are freelancers and others have their own businesses. This generation likes to experiment with products because it has better disposable income. This also makes this demographic extremely likely to pay money for online gaming especially fantasy sports. In the US, 53% of fantasy sports adult players have an average household income of $75k.

Fantasy sports became a huge industry due to fantasy football. And despite that now the industry is relatively stable, fantasy sports players are more engaged than ever before. While 66% fantasy sports players in the US are still inclined for fantasy football (NFL), there’s a whooping 49% that’s playing fantasy baseball (MLB) and 34% are playing fantasy basketball (NBA). There’s a considerable inclination worldwide for hockey, NASCAR, soccer and golf. In the UK and South-east Asia, there, is fantasy soccer and cricket.

# 5. They are multiple-device people

This is a no-brainer that this demographic uses and has access to devices – a high-tech television, laptop, computer, phone and tablet. While 81% people can play fantasy sports on any of these devices, 54% prefer playing it on a laptop or a computer. There’s also a growing demographic that’s dedicated one single device just to fantasy sports. As of now, FSTA reports that 46% players play fantasy sports on a high-tech television for better user experience while 36% use tablets. At least 28% use a streaming device such as a phone or a tablet and 27% use a gaming console. At least 28% use one device, 23% use two devices while 24% use three devices for playing fantasy sports.

Daily Fantasy Sports is the second most popular kind of fantasy sports played worldwide. DFS has played a major role in the success of several startups who became multi-million businesses in a very short span of time drawing large investments. In DFS, tournament style game is more popular than head-to-head. In fact 68% of DFS players play tournament style while 58% play head-to-head.

Vinfotech understands this demographic deeply. This is precisely why most of our fantasy sports website & mobile applications are full of features that appeal into the psychology of fantasy sports players. If you wish to create a winning fantasy sports business, do contact us.