Fantasy sports players are spending a lot of money on non-sports online gaming also. See how businesses can benefit from this.

You already now know that most fantasy sports players prefer playing paid games because of higher levels of competition and prize money. They are willing to pay the money by way of –
/ Entry fees
/ Hosting fees
/ Prize fees

But which fantasy sports attracts which kinds of players willing to pay certain kinds of fees for playing? The infographic below, shared by FSTA in its 2017 report, gives you a clear idea – 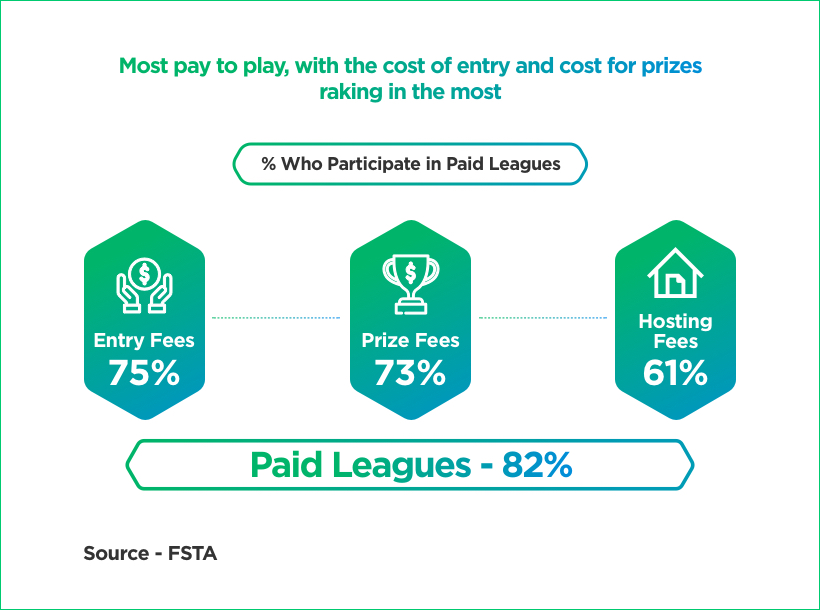 What’s vital for businesses and sport leagues is fantasy sports play a major role in selling team and brand merchandise. The FSTA report claims that most fantasy sports players spend on prizes outside of cash with prizes including clothing, rings, belts and trophies. It says that 73% of traditional players spent prize money on special prizes in at least one league.

Most traditional fantasy sports players host or like to attend draft parties. The FSTA report says that these draft parties are typically for fantasy football, hockey, car racing, basketball, baseball, golf and soccer. In fact, 84% of these would be involved in draft parties of any sport.

Draft parties are officially in the culture of fantasy sports world

How can sports brands benefit from draft parties and fantasy sports socializing ?

Fantasy sports socializing has come a long way over the years and it’s becoming more serious by the day. This socializing is not only limited to draft parties. It also involves nights at bars, attending sporting events together and dinners. FSTA says that 51% of fantasy sports players love going to sports nights at bars while 50% would love attending a sporting event together. The same reports says 50% players love league dinners, 47% would go to a group trip involving fellow players and 44% would go to a golfing game together. This is how sports brands and sports leagues can benefit from this socializing?

As many as 68% leagues spend on a league loser punishment. This also goes a long way in promoting league brands among fantasy sports players.

Sports leagues can come up with offers on the fantasy sports platforms about sponsoring draft parties or league dinners upon the completion of each game. They can practically own these draft parties and promote their own brands and merchandise all through the year.

What’s most interesting about the fantasy sports demographic is that they are compulsive gamers. Fantasy sports are but one aspect of their online gaming addiction. They are heavy players of other sports and non-sports competitions. When it comes non-sports games, fantasy sports players are playing –
/ mobile games
/ social media challenges
/ lottery
/ casino
/ sports betting

Fantasy gaming contributes $7.22 billion to the US economy. Such is the extent to which this demographic spends money on various kinds of online gaming.
Fantasy sports players are primarily seekers of entertainment. Non-sports brands in automobile, consumer goods, retail sector can practically leverage from this thirst for entertainment and build their own brands. They can considering building fantasy games around either their brand, industry and can promote their own products and services easily.
Vinfotech is world leader is fantasy sports app development across industry verticals. For us, fantasy gaming is not only about sports. We have helped non-sports brands such as NationBall- A Political Fantasy Software , Street Fight - A Fantasy Stock Market Software or GM Genius - A fantasy football platform to learn math skills to target their customers successfully on fantasy platforms. Fantasy sports solution is now an emerging culture and can be an effective way for building brand loyalty. If you are a brand looking for leveraging from fantasy sports website or mobile application, give us a call.