Fantasy sports have changed the way businesses looked at sports industry. And the atmosphere is changing for good.

Manchester United (British Premier League) is now the biggest sports team in the world with a revenue of over $774 million. This is followed by Dallas Cowboys (National Football League) with a revenue of $700 million, FC Barcelona (La Liga) with $697 million and Real Madrid (La Liga) with $697 million. A large part of their success lies in television viewership and fantasy sports applications – the two factors that have helped them grow a worldwide always multiplying fan base.

Most popular sports in the world 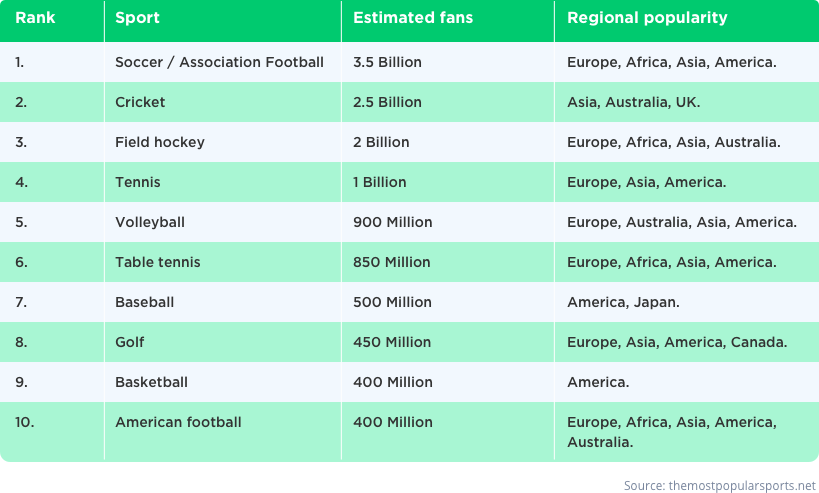 The inevitable growth of fantasy sports

This is no coincidence that all these sports became phenomena overnight while the internet became an everyday tool. Both these factors came together to shape the way millennial fans looked at sports in general. The growth of fantasy sports was inevitable because these platforms provided this fanbase with the statistics that their older counterparts lacked while being able to use those statistics and win prizes. Fantasy sports multiplied the growth of various leagues, sports clubs and sports genre in general because –

This became the most decisive factor in the growth of fantasy sports because internet provided fans a platform to play the said sports themselves. Fantasy sports platforms gave them statistics about teams, players, leagues, salary caps and so on to literally play with in fantasy leagues. This helped in the transition of several passive fans into active fans.

Another factor that fantasy sports provided to most fans was the instant gratification channels. It wasn’t enough to watch a sports game and feel disappointed or elated over a defeat or victory. Sports fans could not change the outcomes of the actual games in fantasy leagues. This coupled with prize money, the competition against friends, colleagues or fellow fans sitting across the globe and the ability to interact with them only further increased their sense of gratification.

The watching or following of sports today is not limited to actual live games in stadium. It’s now about watching on television while constantly chatting with friends about it online followed by a fantasy game afterwards. This has led to phenomenal fan engagement.

There are fantasy sports matches and live fantasy games where players use more than one screen (sometimes two to three screens in the forms of mobile phones, laptops and tablets) to play, interact and challenge each other. Even while watching the actual games on either television or through live streaming, these players are hooked to one fantasy sports application. Live fantasy applications give a golden opportunity for leagues, sports teams and broadcasters to track user behaviour leading to valuable insights about their reactions while the game is on, during substitutions etc. Live fantasy apps also create an additional revenue streams for the entire sports industry.

If a report by IFSG-AC and Nielson is to be considered, 89% of users play fantasy sports at least once a month. A sports fan spends about 40-45 minutes on a fantasy gaming platform on an average. Now that’s good news because this is decent engagement. This means any fantasy games business would eventually have this kind of basic average engagement that can be doubled with added features, cash prizes or discounts in future. Sports teams and leagues will find that brand integration through or on a fantasy sports platform would definitely pay off and the brand would enjoy the loyalty for a longer period of time.

# 3 Data analytics and AI add to the value

Fantasy game platforms are all about data. From player and team statistics to the data collected in real time on and about users – there’s a lot of analysis to be done. Sports companies and leagues have now the opportunity to not only analyse their fan behaviour but also predict their buying or engagement choices in future. Fantasy sports website or applications are integrating AI into their chats and discussions which is further aiding sports brands to please fans indefinitely and benefit from fan sentiments in future.

What’s very interesting about the fantasy sports demographic is they are always evolving and wanting to try out new things. A fantasy football player is more likely to try out a NASCAR fantasy platform than someone who never plays fantasy. As a result, sports categories that may not have a huge fan base can easily benefit from creating fantasy sports platforms to convert say soccer or football fans. This would only pave way to expansion of sports industry in general because then every sport would have a fantasy version. When a whole industry grows, every party is benefitted and this also results in regulations of laws so to create a more democratic form of business. The development of such kind of ecosystem for sports is a great sign of its growth.

Vinfotech is a world leader in creating fantasy sports website & mobile app for over eight years now. We have created fantasy sports applications for over 15 kinds of sports and we are adding more to the portfolio each year. If you are a sports brand, league or merchandise business wanting to create a fantasy sports platform around a certain category of sports, do give us a call.