We have created a product exactly on the lines of fantasy world cup, a software that fans love to play on. We provide an ultra-modern tournament mode fantasy sports solution that can accelerate the growth of your fantasy sports business. It is a ready-made software that can be quickly launched as white label or can be tailor made as per your requirement.

A robust, versatile, and scalable platform for your ultimate fantasy sports website/app experience. 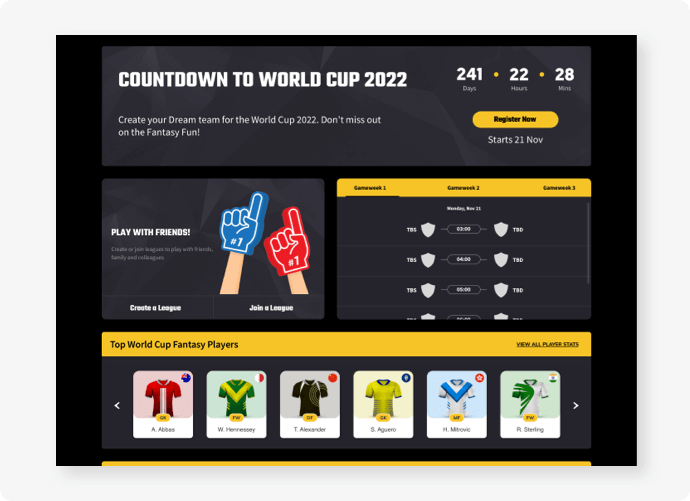 The homepage is beautifully designed, robust, and features enriched to suit all your user needs. Home is a page where users can view the overall stats like earned scores, top-performing players, team overview, and more.

Here users can create their team using their skills, run their research, and pick the best players to create a super-efficient team.

Fixtures are a list view, consisting of the upcoming and past weeks of the tournament and information about yellow cards, saves, goals, and assists.

Unmissable Notifications added to World Cup Fantasy! Amazing live Notifications through Email, Push and In-App mediums which takes care of injuries, suspensions, unavailability and many more. Now you can forget to add reminders. We do that for you.

After creating a squad, we can join and create leagues to compete with friends, family and colleagues. The various league types are-

Compare players before you make decisions every week. Detailed in-depth stats that help you choose the best performing players while you make your transfers. Save a lot of time, all the numbers in one screen!

Users can now see a detailed report of their own performance and others who are playing with them. Now it is easy to track the overall performance and also compare your performance against any rival at the click of a button! Rank, points and the boosters available can be viewed without any hassle.

World Cup Fantasy Software provide a variety of scoring parameters that can be managed from the admin panel. You can set your own scoring rules for the overall game play. During the tournament, the fantasy football players chosen by the users in their respective teams will be allocated points based on their performance in the league.

The scoring system is entirely customizable, and you can make the changes from the admin section. It can be automated, or we can also provide a manual entry system. 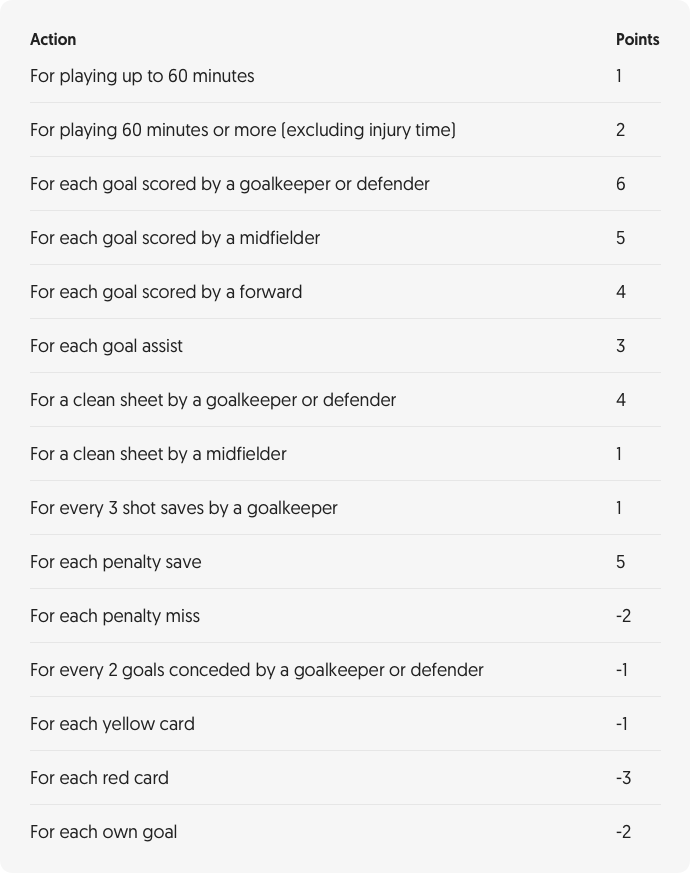 We all know the importance of static pages namely About Us, Contact Us, how it works, Rules and Scoring, Terms of Use, and Privacy policy. Transparency about your company’s core values and history, reliable contact information, rules and regulations about the game, terms of user engagement can help you develop user trust and loyalty.

Our admin panel empowers you to manage everything - marketing, finance, daily operations, sponsorships, and reporting.