Blockchain technology shifts the cost of trust and co-ordination to a network rather than people. Read how.

The reason why blockchain technology has the potential to become the next stage of networking is that it shifts the cost of trust and co-ordination to a network rather than people. A Harvard Business Review article aptly describes this – 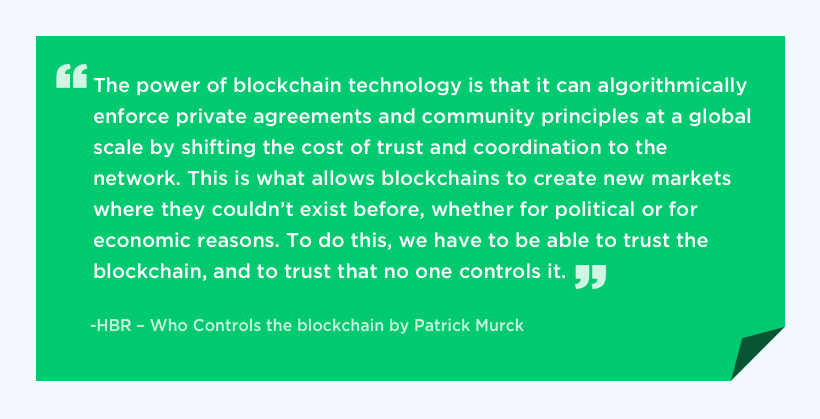 The blockchain is actually a decentralized and distributed ledger used by cryptocurrencies. But now the technology can also be used to disrupt other industries and applications, including social networking. The only choice social networks will have in a few years is to adapt and embrace blockchain or else they would be disrupted. Blockchain systems like Ethereum and NEO have the ability to run applications and establish smart contracts. Startups are already engaged in the design and development of social networking websites based on blockchain.

What are current social networks missing?

Even when most social networks say that users own their posts and content, the fact is these networks are aggregating user behaviour data and selling it to companies for advertisement targeting and marketing purposes. With blockchain, this would become a decentralized system where users will truly own their own data and absolutely nobody would have access to that data.

Facebook is even eavesdropping on users through the microphone of their smartphones. Thus security on these social networks has so far proved to be a myth. However, it cannot be denied that social networks continue to be a vital source of collaboration, business networking and exchange of ideas and information. So if we combine this benefit of social networking with the decentralized system of blockchain, we will have social networks that thrive without compromising on users’ security and privacy. Blockchain technology encrypts all data and uploads which makes data impenetrable for anyone other than users. This kind of encryption happens right at the stage of the social networking design and development.

Blockchain gets rid of the central server. As a result, there’s no single entity that can enforce monitoring and controls on user-generated content. Content cannot be used for analytics and advertising. But then how will social networks survive like this? By paying node hosts in cryptocurrency so that these hosts have a financial incentive. So say, instead of integrating payment mechanism at the time of social networking website design and development, the owners will now use blockchain mechanism to pay in say Bitcoin.

#4. Social networks may now be used for payments

One major challenge companies engaged in social commerce face is the trust factor when it comes to buying directly from social media sites. Facebook has been trying to implement a form of payment mechanism through messenger but somehow users are still sceptical. Blockchain is already being used by cryptocurrencies so social networking through blockchain will already have the trust of the users in terms of payments. Users can exchange coins or tokens through the same social networks. Similarly, smart contracts may help social networks work more like a trusted network where users can engage in transactions through contracts that are cryptographically-signed and executed. Startups, companies, brands can integrate social with all kinds of transactions when this happens on their social networking websites during design and development.

While social media websites are largely being used to promote causes, they still need dedicated crowdfunding websites for users to finally make a contribution. Sites like Kickstarter or Indiegogo have been immensely successful but the payments have always been made through their own systems. But when a social network is run through blockchain, these funds can be raised directly on the social media sites. This would happen in the same way as the payments happen in the cryptocurrency world, without the help of external payment mechanisms.

The reason why blockchain technology has the potential to become the next stage of networking is that it shifts the cost of trust to a network rather than people.

#6. No censorship to speech

There are many countries where governments track down users speaking against the system or raising questions against the cabinet. Their accounts are blocked or they are bullied by social media activists of political parties. Though current messaging apps such as WhatsApp or Snapchat have end-to-end encryption, the meta data can be picked up by third parties. As a result, interested parties know the source of the messages. Blockchain-enabled messaging apps like Obsidian have removed the need for user accounts. Addresses don’t contain any information that can be linked to phone numbers, email or other accounts. The metadata of communication is scattered over the globe so it’s near impossible to keep hold of it.

How do fans in today’s age follow their favorite sports? How do they really integrate sports with social med...

The benefits of fan engagement can never be overstated. Rewarding fans for their loyalty and viewership on a s...

Messaging is the most widely used internet facility. Sports industry is using it to engage with their fans at ...

Sport, by its character, is meant to be shared. And today there are more opportunities that fans can count for...