A University of Mississippi research found that students who played fantasy sports got better at Math. See how fantasy sports are leading to a cultural shift in the US.

Behold, the world just found a brand new reason, okay not that new but a grand one for sure, for playing fantasy sports. As it turns out, fantasy sports are proving to be useful for learning and understanding mathematics.

Between 2007 and 2009, the University of Mississippi conducted separate surveys of 144 teachers and 342 students who participated in fantasy sports in mathematics class. The results are compelling:

It has been observed that fantasy sports applications develop logical reasoning, quick decision making, situational awareness and sense of competition among students which enables them to be well-equipped to face the real world after they pass out of school or university. 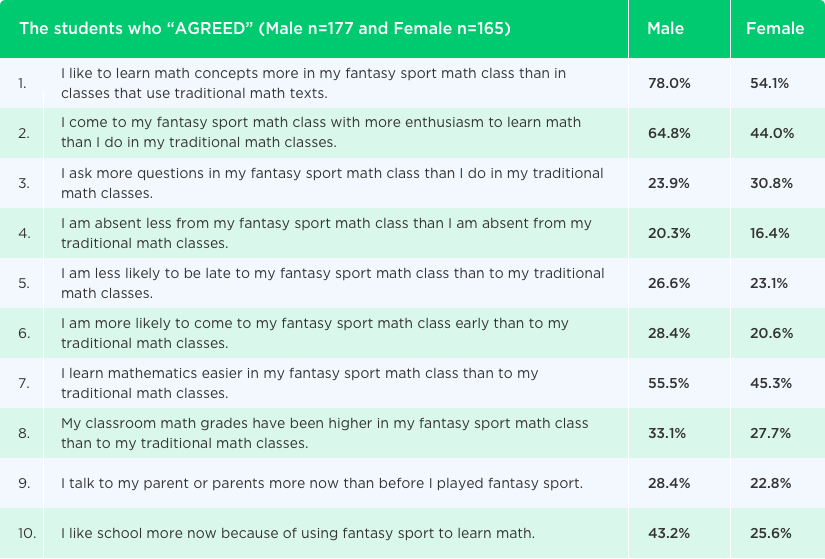 Fantasy sports are used in elementary schools, middle schools, high schools, and higher education. In the latter case, a class of 80 student athletes at Humboldt State University participated in fantasy football. Thirty eight percent of the students received A's on the pre-test. That number increased to 83% on the post-test.

Fantasy sports is leading to a cultural shift

A good cultural shift is now being visible in how the games are changing lives, both academically and socially. Fantasy sports are also helping families to connect, as students get help selecting their teams from their fathers, brothers, and grandparents.

There are schools where everyone is playing: Students, teachers, administrators, staff, and parents. "Draft Nights" are common, where parents and students come to school to draft their teams together. School community is promoted. New friendships are formed. Fantasy sports are also helping to empower girls and break down the gender gap. Girls report that fantasy sports are “cool,” and that the games help them to relate to the boys as equals. Simply put, fantasy sports can help reduce math illiteracy in America. Now imagine if NFL players visited schools to draft fantasy teams to compete against the students. Student motivation would be off-the-charts!

This is critical, because millions of students are currently willing to do anything to get out of taking math courses in high school and college. As a result, the US is often deprived of engineers and technicians to meet the technological needs of the future.

The data also indicates that once girls get a taste of the competition, learn a little bit about football, and discover that they can beat the boys, they become more motivated. Forty three percent of the teachers who responded in the survey agreed that boys are slightly more motivated than girls, while 37% of the respondents agreed that girls and boys are equally motivated.

The data also indicates that students (especially girls) are asking family members for help, which has considerable implications for family dynamics as families play fantasy sports together or help each other with their teams.