What makes a Citizen Engagement Platform a must for Smart Cities

The idea of a modern smart city is to improve the lives of its citizens and businesses together. The most efficient way to achieve this is via Citizen Engagement Platforms.

A Smart City, as defined by the European Commission is “a place where traditional networks and services are made more efficient with the use of digital solutions for the benefit of its inhabitants and business.” As the world moves to a more technology-dependent phase, the concept of smart cities is being adopted by many countries around the world. In fact, according to research conducted by Grand View Research, the total value of the global smart city market is projected to exceed US$1 trillion by 2020 and US$2.5 trillion by 2025. 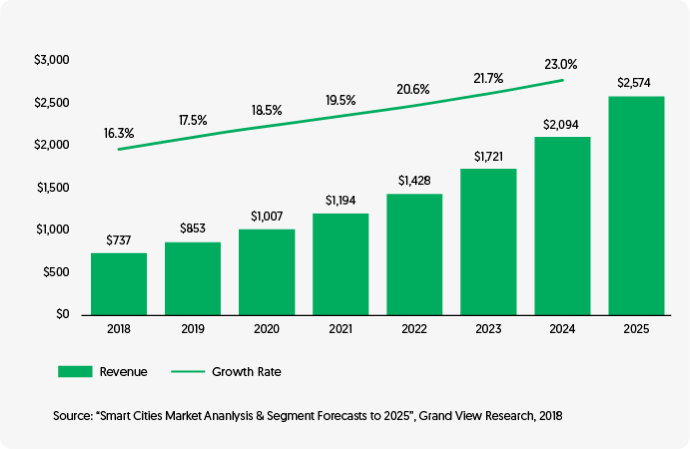 So as the growth of smart cities continues at the aforementioned exponential rate, it is important to understand what forms the core of it. To develop a smart city, the constant communication between the citizens, the governing bodies, and the variety of businesses in the city is the key. As these three verticals start communicating with each other, they discuss ways that can help the development of the city that suits everyone as a whole. This is where the idea of a City Social Network comes in. A social network that just focuses on bringing the above three subsets of a city together can go a long way in aiding smart cities’ development.

So, if the idea of a smart city is to essentially improve the lives of its citizens and business, the biggest aid it can get from it is via these citizens and businesses themselves. So a Citizen Engagement Platform or a City Social Network serves as an effective tool in bringing them together and talking to each other and the government on the things that matter the most.

What are Citizen Engagement Platforms?

Citizen Engagement Platforms or a City Social Network platform, as the name suggests are specialized social media platforms that are custom made for a particular city. They help the citizens connect with each other and with the business community. It then opens up a channel to further communicate together with the people in charge of the city for more hand-in-hand and sustainable development of the place. With the concept of smart cities rising at a rapid rate, the need for a collaborative, intuitive, and fun social platform for the cities is the best way to ensure that the cities progress with the help of their citizens.

A City Social Network is also beneficial for the governing bodies of the city by providing a platform to build trust through dialogue, engage with residents in decision making, or even run crowdsourced projects at a city level. This helps them work on the things that the city needs while keeping the needs of the citizens at the front and center of everything.

A City Social Network has something for everyone!

Whether you’re a business owner, an employee of the government, or a law-abiding citizen of a sprawling and upcoming smart city of the world, the idea of a City Social Network should excite you. A Citizen Engagement Platform has something for every type of person in a city, as it brings everyone together for a more unified approach to development.

Let’s see the benefits of a City Social Network to each vertical of a city:

The Residents: For the normal residents of an upcoming smart city of the world, a City Social Network is first and foremost a tool to communicate with other people just like them. The sense of belonging that is often absent from huge, worldwide social networks doesn’t apply here; as the only people you’ll have a chance to interact with are people that are in the same city as you. This dialogue, consisting of a shared background and knowledge, will form the key experience the residents will have on a Citizen Engagement Platform.

Not only that, but the citizens will also be able to do things like asking questions about the city, participate in the discussions concerning public interest and the city’s development.

The residents also have the option to follow and get updates from the local administration, follow places and businesses they visit often and get updates on things like jobs, real estate and events happening in their area. 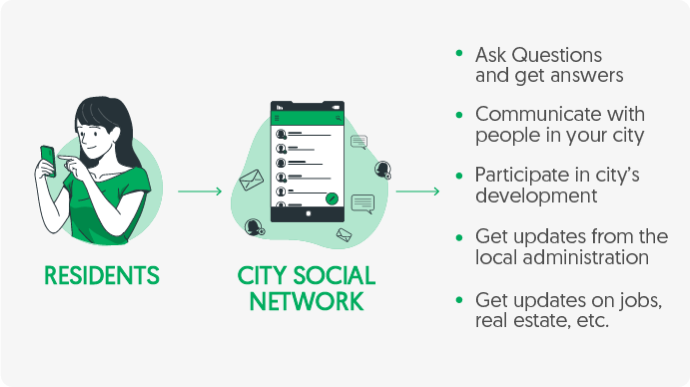 The Businesses: Local Businesses in a smart city can also massively benefit from the use of a City Social Network. The first and the most obvious bit is targeting the people of the city through feature posts and updates. What’s the best part about this is the only people you’re showing those updates to are the people from your city. So, for most local businesses, which need walk-ins, a Citizen Engagement Platform is a boon to ensure they get the necessary attention towards their business.

Furthermore, to get more traffic towards their business, they can also monetize it on a City Social Network through targeted ads, or even with interactive content such as Quizzes or Trivia. Having your business be a part of your City’s Social Network would mean you can also know about your customer base better, interact with them and tweak your services accordingly. 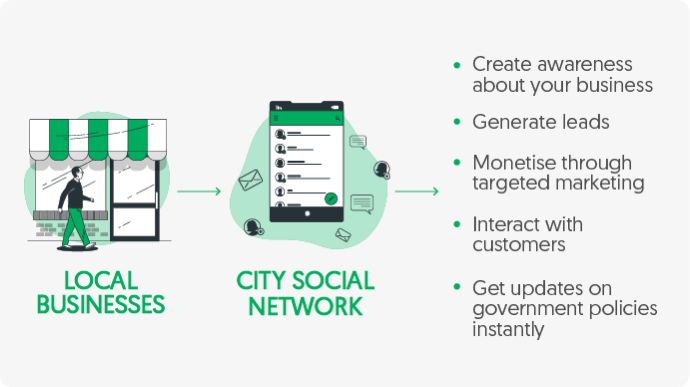 A Social Network that gets you updates about the city also helps business owners get necessary updates on government guidelines instantly, which helps them tweak their strategies accordingly.

Local Governments: The advent of the City Social Network can change how local governance in a city works. With the power to stay connected with the people and businesses of the city, the local government of the said city can use it to everyone’s advantage and engage with them to come up with efficient decision-making in real-time. The residents and local business owners can give out their problems and possible solutions to those problems to the government and then they can have real-time data about the same.

Another amazing advantage of a Citizen Engagement Platform for the Local Government is that they can build a trust-based relationship with the people and business so that they have their maximum support. The people in charge are often viewed in a negative light; but when you see them interacting with you, cracking jokes, asking and handing out suggestions, it would create a sense of relatability among the masses and they would gradually start trusting the local authorities more.

Moreover, with a platform to discuss, communicate and grow online, the Local Government can also start crowdfunding programs which would get a lot more attention and awareness than it would’ve gotten offline. Getting volunteers for certain projects also can be a great use of the City Social Network in helping out the local government. 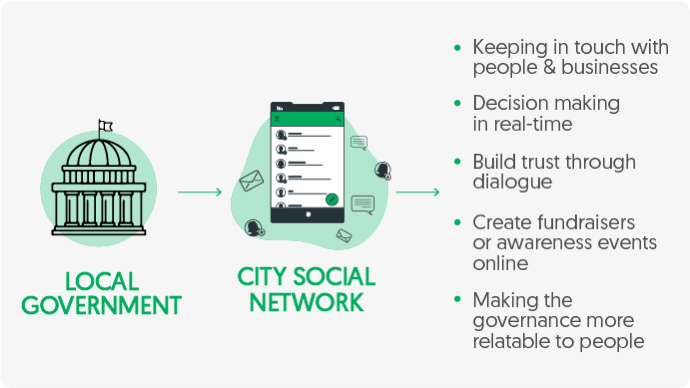 By looking at the aforementioned points, we can safely say that there are numerous benefits of having a localized social network focusing on one city while having no inherent disadvantages to the same. A Citizen Engagement Platform is an essential tool to aid the growth of a Smart City, as it helps the city’s development through the cooperation and communication of its people. By having a platform for the citizens and businesses to communicate with each other and with the governing bodies of the city, everyone can actively participate in the growth of the city.So how can you get a City Social Network for your beloved city? The answer is simpler than you might think. Now, any city can have its own Citizen Engagement Platforms with the help of Vinfotech. The amazing team at Vinfotech helps any local government or business by whipping up a Citizen Engagement Platform that’s customized and tailor-made to fit your city’s needs!

For successfully creating a scalable City Social Network that captures the very essence of the city, while keeping everyone in the community for the successful development of the place as a whole, Vinfotech has the right tools, the right experience, and the right people to take over the mantle.

YOU MAY ALSO LIKE…
Social Networks
The Future of social network Platforms and Ways in Which Businesses Can Utilize ...

The future is niche, as more networks arise to unite people who share a common interest -- be they neighbors, ...

Social Networking platform is attracting new user and it’s increasing day by day so social networking is the...

Take a closer look at the evolution of social media app development and several emerging trends that are to sh...

Niche social media application can help you to connect with your targeted audience. Read more tips.