What fantasy sports industry stats are hinting at?

Fantasy sports players are now willing to pay more, spend more on their favourite games. How can you tap into this fact?

From just 500,000 back in 1988, fantasy sports users are now 59.3 million in USA and Canada alone. These users spend $556 on an average on league-related costs, single-player challenge games and league-related materials in a period of 12 months. No wonder, this is a multi-million dollar industry where online playing is just one aspect of the entire eco-system. There’s merchandise, sponsorships, tickets to actual games, draft parties, brand marketing and so on. Fantasy sports players have today become the biggest influencers in further elevating the popularity of their respective real game counterparts. And that’s a Yay! 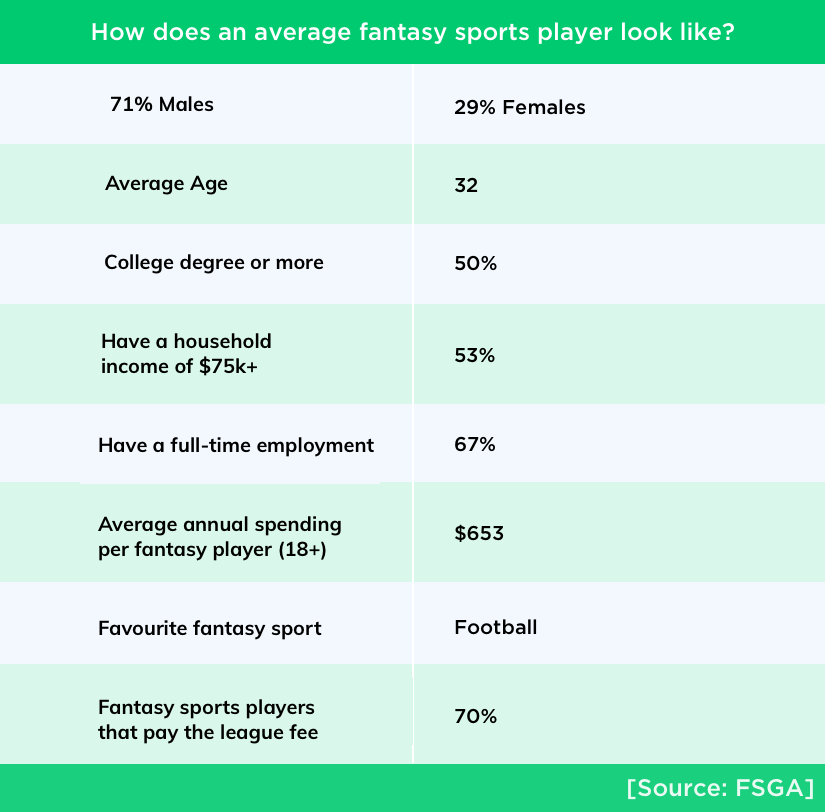 The above table clarifies that fantasy sports are definitely something that players are ready to spend their money on. If on an average fantasy sports players are ready to shell out $556 in a year, you need to pay attention to this demographic. Seasoned fantasy sports players almost always engage in paid games. For them, the thrill and excitement of using their knowledge of both real and fantasy games are everything. As a result, they do understand that unless they engage in quality paid games, they wouldn’t be able to compete against the best players on the platform.

Fantasy sports players spend $556 on an average on league-related costs, single-player challenge games and league-related materials in a period of 12 months.

Fantasy sports players like to spend on related material

Fantasy sports industry is where your money should be

Fantasy sports players have made the industry so big that any enterprise that is able to create an engaging fantasy sports platform has greater chances of succeeding today. According to a study, over the next five years, the Fantasy Sports market will register a 13.24% CAGR in terms of revenue, the global market size will reach US$ 33199.64 million by 2025.

Vinfotech can help you tap into the potential

Vinfotech has a long list of successful fantasy sports platform development projects Fanview, Betsperts, Refpredictor, Funtasy11 to name a few– most of these are today bestsellers in the industry. If you think you have a business idea for this industry, we can convert it into a winning fantasy sports solutions. Let us know.

Are you considering building a fantasy sports business in 2020? Here’s all you need to know about the Indian...

Fantasy Sports
An investor's guide to the Indian gaming industry

India gaming industry is on the verge of becoming one of the leading markets in the Gaming Sector.

What to know the three things Indians are crazy about? Politics, cricket, and films. Read how you can use thes...

With coronavirus putting sports on hold, the fantasy sports industry in India is trying to innovate with new i...